In Week 8 all students will get chance to vote on proposals to change the structure of our Full-Time Officer Team - reducing the number of roles from six to five and making some significant changes to the structure of the team.

The vote will be the final stage of a process that began with our Officer Review and can be found here.
Here's everything you need to know about what's proposed, why, and how you can have your say...

It’s when students’ unions look at their Officer Teams and portfolios to see if they are representative of the needs of their student members. This involves talking to students about how they perceive the roles currently and how represented they feel by the SU.

We’ve been talking to students about officers for the past 18 months and we’ve had an external review conducted by the NUS. This work has led to making these proposals.

What is the proposal?

Under the new proposal, the team will be reorganised to incorprate the roles of:

The infographic below explains the proposal in detail - click the image for a hi-res version. 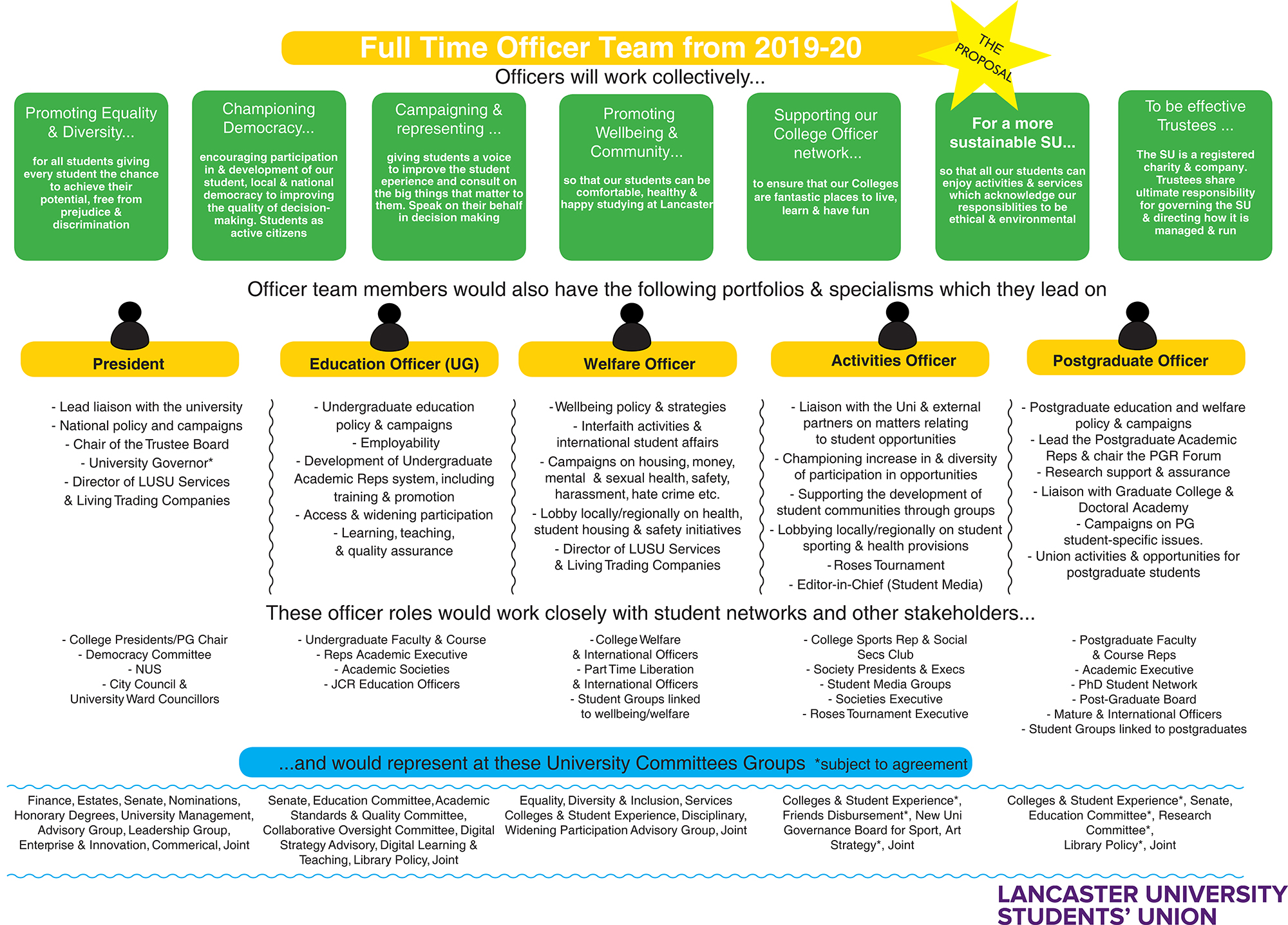 The last officer review took place in 2012/2013, since then over 6,000 students have graduated from Lancaster University, with each cohort of students demonstrating slightly different trends, behaviours and representation needs.

To ensure the students' union is representative of the current cohort it is essential and is good practice to review the Officer Team structure. We have done this with support from the National Union of Students (NUS). We have undergone various consultations with students, reviewed officer structures in similar institutions, and focused on the demographic of our student body and their activities.

Following the democratic review in 2015/16 and its implementation in 2016/17, it seemed only logical to now undergo the officer review after the embedding of the democratic changes to ensure our officer team is representative of the needs of the students they represent.

The referendum is being campaigned upon by two different groups on campus to ensure that our students are made aware of all of the arguments both for and against the proposed changes before placing their votes. You can find out more about this by reading the manifestos submitted for the Vote Yes and Vote No campaigns.

What happens if members vote against the new proposal in the referendum?

If the referendum result is 'no' then the current officer positions would remain as they are for the foreseeable future.

Have we talked to the university and will they accept this?

This proposal is about making student democracy stronger and it is therefore important it is led by students.

The union has had discussions with some members of staff within the university to test the idea, and to discuss what other changes would need to happen if a Postgraduate Officer were to be approved. Although this is a democratic decision of the students, university senior managers have said they will accept either outcome of the referendum.

No there isn’t. Any full member of the students’ union can run to be an Officer and international students can get a tier 4 visa to cover them being Full Time Officers.

Who would be able to vote for the Postgraduate Officer?

As the officer would be a senior/Full-Time Officer of the students’ union and a Trustee, legally any student will be eligible to vote for them. It wouldn’t be restricted to postgraduates.

Which students would be able to stand to be the Postgraduate Officer?

Only postgraduate students would be able to stand as our Postgraduate Officer, however, all students are able to vote in this election.

How do I vote?

Voting is open until 4pm on Friday December 7 2018. Place your vote at www.lancastersu.co.uk/referendum