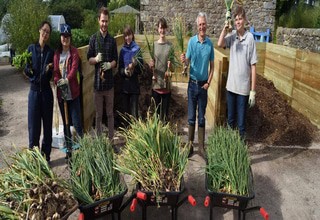 Staff and students at Lancaster University are celebrating after receiving a Special Award for Innovation from the Green Flag Award Scheme.

Edible Campus, run by Lancaster University and Lancaster University Students’ Union as part of their Green Lancaster partnership, is one of just fifteen inspirational projects in the UK to achieve the award, which is presented to Green Flag Award or Community Award winning sites that have made changes that have brought outstanding benefits to both their site and the local community.

Launched in 2009, Edible Campus is a student-led project created to give everybody at the university and further afield the opportunity to learn about cultivating and sourcing sustainable food.

The on-campus Ecohub, which forms the HQ of the project, features outdoor growing areas, greenhouses and is home to a family of former battery hens. Growing takes place on a number of further sites on campus, including a pick-your-own orchard. Student volunteers help to maintain the smallholdings and run regular sales of produce grown on site.

The Ecohub hosts regular visits from the community, and has become a popular destination for primary schools wanting to teach their pupils about sustainable food.

Lancaster University Students’ Union Green Lancaster Co-ordinator Darren Axe said: “We’re honoured to receive this innovation award. The success of the Edible Campus project is down to the creative thinking of everybody involved – the university has been generous in providing us with enough space and resources to make things happen, while our student volunteers have brought a huge amount of passion, enthusiasm and imagination to our projects. We’ve been able to build a really great partnership that has given us the opportunity to share ideas, try new things and work together to continue developing.”

Lancaster University Facilities Landscape Manager Ian Sturzaker said: “It’s fantastic to be recognised by the Green Flag Award. Receiving an innovation award highlights the success of this partnership project between Green Lancaster and the grounds staff at the university. Not only have the staff benefited from working closer with the students, but we have been able to implement a number of projects that have enhanced the landscape of the campus.”

Paul Todd, Green Flag Award Scheme manager, said: “Congratulations to everyone involved in Edible Campus, a worthy winner of the Special Innovation Award. Research has proved that quality parks and green spaces play a vital role within their local communities. Edible Campus is a perfect example of this.”