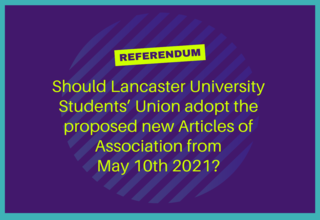 The following is the manifesto for the Group that is campaigning Yes in response to the referenda question: Should Lancaster University Students’ Union adopt the proposed new Articles of Association from May 10th?

Voting in this referenda will take place between 10am March 3rd and 12pm March 12th at www.lancastersu.co.uk/evoting_referendums

Vote YES to change the Articles of Association!

The story up to this point:

In the 2019 AGM (Annual General Meeting), a motion was submitted to democratise the Union. It called for the re-establishment of Union Council, for Trustees to be Elected, and for Student Trustee numbers to be increased. In a subsequent referendum on whether or not the Trustee Board should be majority-elected, the membership voted in favour by a margin of 90%.

In May of 2020, the consultants CounterCulture were appointed to carry out a thorough review of our existing governance arrangements, and by the end of the year, the review was completed and submitted to Governance Sub-Committee. Whilst the results of the consultancy were mixed, the review of our governance was combined with the views of the students as expressed in the 2019 AGM and referendum, and new Articles were produced in the last two months for your consideration.

A lot of the detail was taken out of the Articles of Association to be put in the Byelaws. This allows the Students’ Union to better adapt its governance to changing circumstances.

We will also be bringing forward a set of proposals for the Byelaws. These proposals include the establishment of a FTO (Full Time Officers) Directorate to better execute policy decisions and moving the Environment brief to the Union Development Portfolio.

However, the major points of change in the Articles are:

The JCRs, the Liberation Forums, Societies Federations, Sports Teams, Academic Reps, and others will all be represented in panoply of stakeholder engagement sub-committees, there to make sure that no-one is left out of conversation around our Union.

All these reforms hope to bring the Union back to earth, make it less top heavy. By establishing Union Council, we have a real counterweight to Trustee Board, and by making all positions on Board accountable to the membership, we will have a Board that follows the wishes of the membership.

In short: democracy is easier and more accessible for more people.

Why should I care?

The way an organisation is run matters and influences how well it uses its finite resources. When an organisation is slow to implement the wishes of its governing committees, then you have a problem. By refreshing the governance, we hope that decisions around the future of our Union are made relevant to all our members.

Vote Yes, to say Yes to a Better Union.