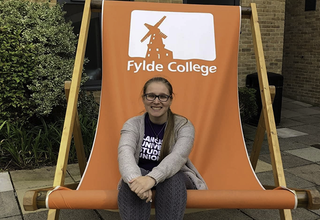 I am really sad to announce that as of the 5th of February, I will no longer be doing the job I love and working for Lancaster University Students’ Union as your Vice President Education.

I’ve been offered an amazing role as part of the Government Office for Science on their Graduate programme. I previously turned down a job to stay on as your Officer, and in the current climate, I can’t afford to refuse this opportunity. I’m going to be leaving at the last possible moment that I can but this doesn’t make leaving any easier, I’m going to wholeheartedly miss working for and with you terribly.

You’ll probably also want to know what will happen to your representation of your academic interests. With it already so late in the year, notice periods for a by-election would push a start for any potential candidate into the Summer term. It wouldn’t be fair to ask anyone to intercalate for a whole year for only two months of work, and it also would prevent them from re-running for a second term in future. As a result, the FTO Team have decided together that they’re happy to take on the responsibilities of VP Education for the rest of the year collectively, with Atree taking on the majority of the University aspects; Amy, Equality, Diversity and Inclusion; and then a joint effort to lead the Academic Rep scheme. The Union is also allocating more resource and staff time to support my fellow FTOs to make sure your voices continue to be heard in the way they should be. While they may not believe it themselves, the rest of the FTO team are genuinely incredibly talented individuals, and I am confident that they’re going to smash the rest of the year (even if it is without me). That said, I do still have four weeks left before I go, so like usual, that means I’ll still be hitting the Uni full-force on their lack of contingency for students studying in these circumstances, arguing for better teaching provision that is worth your £9250+, and pushing for students to be fully involved in decisions at every opportunity.

When I think back on the last year and a half, it’s been an interesting ride as your representative. I thought it was bad enough when I was told about the potential sale of the Sugarhouse on day 3 of starting back in 2019 (I fully jinxed it by saying things couldn’t get any worse). Then there were two rounds of industrial action, a global pandemic, and I was part of an FTO team that ended the year as a team of three. This was tough. Physically, because gosh, I’ve never worked so hard in my life to get through the chaos, but emotionally too. I promise you that it was so, so worth it. Getting to see the difference I make to your University experiences every day is so rewarding. Things are on the up though, and while I was nervous about meeting my new team this year, they’re such amazing people and I thank them for embracing me wholeheartedly. And for every bad there must be a good, and I could spend hours listing my highlights and great change I’ve been able to be part of, but I’d rather take time to thank everyone who has supported me and worked beside me throughout my position. It’s been genuinely incredible.

I have always championed what has become my well known phrase and philosophy, “what would students think if they knew what we were talking about right now?”. I’m proud to say this legacy has changed the way the University views students in decision making and fundamentally re-evaluated the SU to become a better, more student-facing and stronger member-led organisation. While Lancaster SU still has a long way to go before it’s perfect and is actively working to get there, I genuinely believe that I am leaving the SU in a better place than when it started. That for me is one of the most important things for students I can have achieved.

I hope that after seeing everything I’ve been able to be part of that you might be inspired to consider running for this role in future too (nominations for 2021/2022 are open now!). The impacts of COVID show just how important this role is, and the amazing opportunities you’ll have to be right at the heart of key decision making. You don’t have to have been an Academic Rep, or been part of an SU programme. You simply need a desire to make a difference mixed with a passion for fighting fiercely for the right cause; I was simply an angry Natural Sciences student who thought things weren’t good enough. If you do end up here, I promise you’ll find this incredibly rewarding and I hope you’ll love it as much as I do.

If you’ve bothered reading this far I’ll finish with one thing. A big Thank You for electing me to be your Vice President Education twice, I could not be more grateful as you have helped make me the person I am today.